Sustainable farming has become one of the most sought after methods of food production, and perhaps most overused term in the last few years. But what does that mean? Initially, there is an image that pops into the heads of most green minded people in the know. It is usually one of cows/goats/sheep that live on pasture harvesting their own fodder, chickens foraging behind said grazers, pigs roaming freely through a forest, and crops of fruit/vegetables grown in soil teaming with life from animal inputs and compost. This soil would be so rich and friable that all one would need is a broad-fork and no tilling or plowing would disrupt the intricate, delicate network of soil life.

Ideally, this pastoral utopia would not include any motors fueled by petroleum, because there isn’t hardly anything sustainable about petroleum. There could not be any electricity because even “green energy” sources depend on some truly unsustainable materials, such as 12 volt batteries. This means water would have to be hand drawn or come from a fresh spring and piped in and pumped via a hydraulic ram pump since all the other methods of water delivery depend on a municipal source or an electric pump.

Yes, I know there are well pumps that can run on solar, but those solar panels still have to be manufactured and I would be surprised if the manufacturers of solar panels (not to mention wind mills) are producing their products using only sustainable energy. So there goes the argument for electricity to light, refrigerate, and wash dishes/clothes. Sure diesel engines can run on bio diesel (not truly sustainable btw due to the chemicals needed and finding a source of oil). Actually, most older diesels can run on pure vegetable oil as a matter of fact, Rudolf Diesel’s first engine ran on peanut oil. So alas, this notion of ideally sustainable farming is but a myth. Or is it?

You can find such a farm though. The only people (this newbie farmer is aware of) producing food as sustainably as possible, are a group of folks who call themselves the Amish. The Amish are the only ones that I know of that are wholly self reliant without dependency on a power-grid, petroleum, or third-party. Their saws and drills are hand powered. Their machinery is powered by horse, mule or ox. They are still producing food the way it was done 150 years ago. If there is anything unsustainable in their methods, it would likely be that tillage is commonly practiced to grow crops. But hey, at least they’re plowing with animal power.

So why all this talk about sustainable farming? How many times can the word sustainable be used in a blog post? Are you tired of that “S” word yet?

My buddy David Hammond over at My Dad & Me Family Farm wrote a thought provoking post he titled,

My Four Hundred Dollar Crosscut Saw… Or Questions About Sustainability. 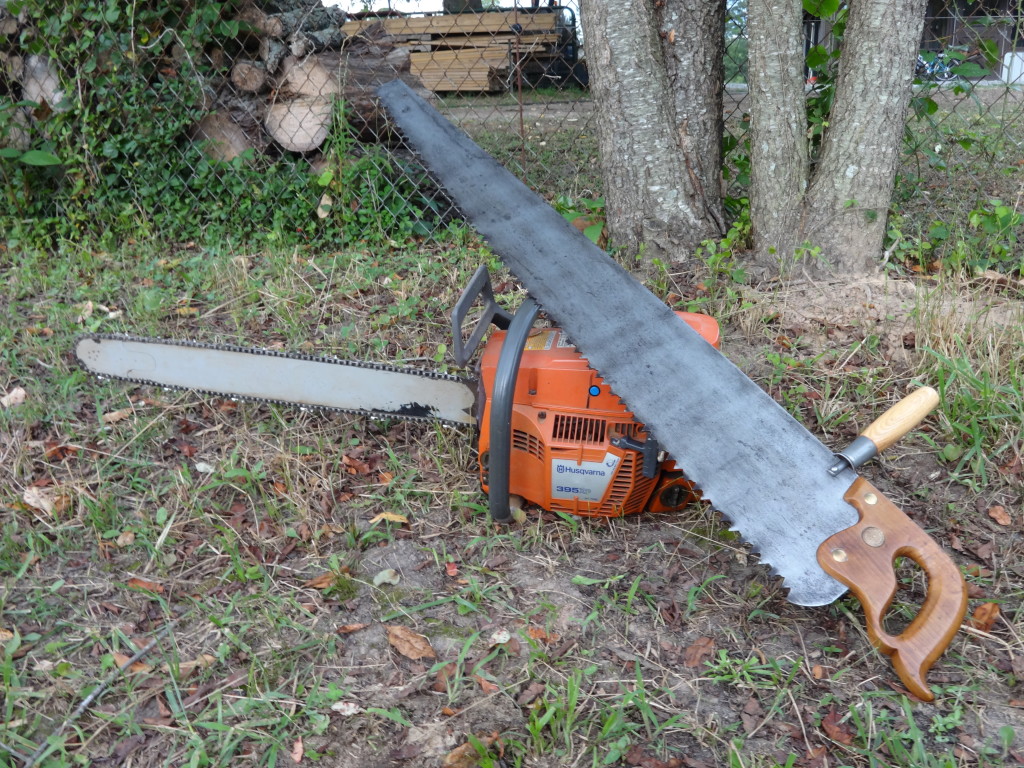 Ever since I read it, I’ve given over to pondering the meaning of the “S” word and in what ways it applies to what we do here at East West Farm. Now you can likely guess what the next blog post might be about.