One man's trash is another's treasure, unless it's a Holstein.

Back a few months ago, after we sealed the deal on the farm, I had picked up our laying hens and was on my to the farm. I stopped at a gas station on the way where, I ran into Jeff, a friend from church. Of course he had to ask about the 33 chickens in cages on my trailer. After telling him about the farm, he asked, “Can I have a cow?”   “Well, sure.” I replied. Jeff’s initial idea was to just pick up a steer somewhere, grow it out, and then eat it. He also saw this as an opportunity to bring some real life lessons to his science students. I tried to sway him toward a bigger picture, finding some breeding stock and actually building a herd of beef/dairy cows. Well he really liked the idea of getting a milk cow, but he still wanted something to eat, so I told him about the Dexter. In a nutshell, the Dexter is a small breed that was developed in Ireland as a three purpose family cow. They serve well as milkers, produce a good volume of meat, and also saw use as oxen. The fact that they’re a small breed means they eat less, can sustain on a grass only diet, and they’re fairly easy to handle. More on the Dexter can be found HERE.  Well after much searching, I realized that a quality Dexter was not going to be particularly cheap, as is the case with any breed of any animal. 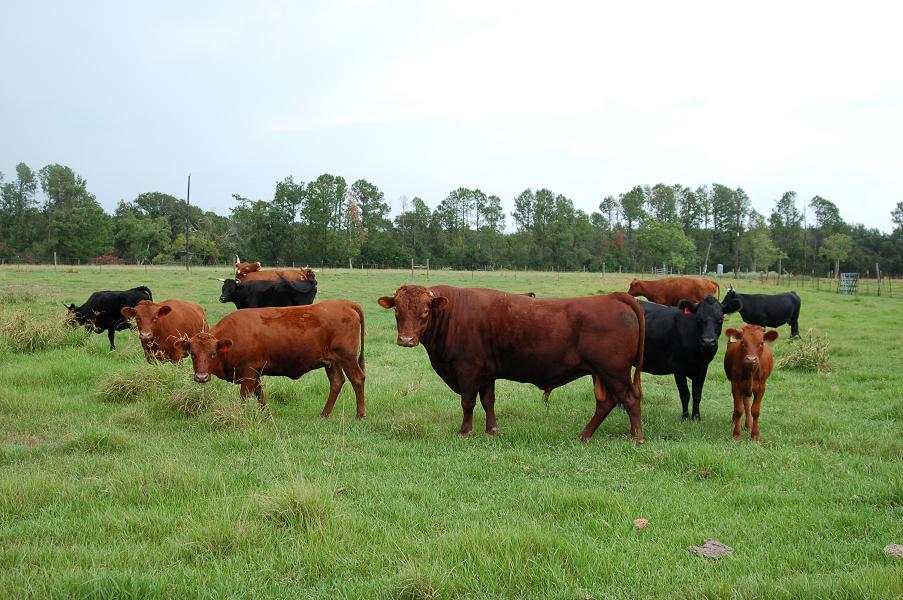 Jeff seemed to shy away from a price tag starting around $1500 for one cow, even if she was bred. So he did some searching around and come across an ad on Craigslist for Holstein bull calves. He talked with a guy near Perry, GA who operates a dairy farm. He was selling his bull calves, buy two get one free. Jeff told him he wanted a heifer, the guy balked but relented when Jeff said he’d only get bulls if he could also get a heifer. So the guy relented. Now Jeff had done his research and knew enough to ask a few questions, primarily did the calves get colostrum. Of course he said yes. For those unfamiliar with colostrum, read THIS. Any creature denied colostrum is destined to have very poor health.

We’ve had these three here for about a month. The heifer is growing nicely, her coat is sleek, she’s active and alert.

The two bulls here, not so much.
The reason for the difference has been evident to those with a lot more experience than me. The bull calves did’t get any, she did. Why, bull calves are worthless to a commercial dairy. Heifers are future money makers, so they get more care. The has pulled me away from my intended path of raising animals for food without the use of medications.

I can definitely say I’ve learned something though, while you shouldn’t look a gift horse in the mouth, it’s not a bad idea with cheap cows.